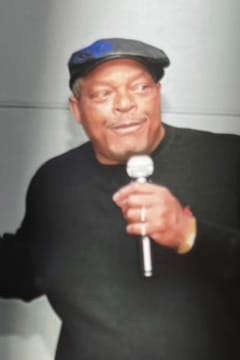 We respectfully announce the passing of Mr. Michael Leon Lakes, age 66, of Riverdale, Georgia on Friday, June 24, 2022 at Southern Regional Hospital in Riverdale.

The Family will receive friends Thursday at the Church from 12:00 Noon until the hour of service.

Due to COVID-19 Concerns everyone in attendance at the Funeral and the public viewing must wear a mask and social distancing is encouraged.

THE EARTH WAS STILL AND THE SUN HAD COMPLETELY IMMERSED TO ALLOW THE DARKNESS TO PREVAIL UPON MOTHER EARTH, AS THE WORLD DRIFTED TO AND FRO, THE DAY HAD ENDED AND THEN QUIETLY MICHAEL LEON LAKES HEARD THE HEAVENLY FATHER’S VOICE WHISPERING SOFTLY, “COME HOME MY SON AND FAITHFUL SERVANT, COME HOME AND REST”.

TO EVERTHING THERE IS A SEASON, A TIME FOR EVERY PURPOSE UNDER HEAVEN:

A TIME TO BE BORN - Michael Lakes was born November 8, 1955 to the Late George and Bessie Lakes in Troup County, Georgia.

A TIME TO DIE - Michael transitioned to his heavenly home on June 24, 2022 in Riverdale, Georgia.

A TIME TO PLANT, AND A TIME TO PLUCK WHAT IS PLANTED – Michael was educated in the Troup County School System (Hogansville, Georgia) and later served in the United States Military where he completed his education. After completing his service in the military, he furthered his education by attending Spartan School of Aeronautics in Tulsa, Oklahoma where he received an Aviation Degree. He worked for many years under the field of aviation mechanics. Not only was he a skilled mechanic, he was also a “Jack of All Trades”. He designed and built his own storage and utility houses; custom flooring; and other home restoration. In addition to all of his other work endeavors, Michael also enjoyed working part-time at Walmart. He lived in Tulsa for a while before returning to Georgia, then Florida and back home again to his home state, Georgia. During his time in the military, he was stationed in Florida, Georgia, and South Korea.

A TIME TO LOVE - Michael met the love of his life at the age of 16 and his tender love was 14. They dated and later vowed to love each other eternally in Holy Matrimony in 1978. His loving wife accompanied him in his many military excursions, before settling back in Atlanta and birthing three marvelous sons to continue their legacy.

A TIME TO GAIN – Michael accepted Christ in his life at an early age as he joined the Mt. Perria Baptist Church in Hogansville, Georgia where he remained a member throughout his life. His pastor, Rev. Clifford Black preceded him in death.

A TIME TO LOSE – Due to her illness, Michael lost his beautiful beloved wife Diana, on March 31, 2021. He is also preceded in death by his parents; George and Bessie Lakes; and a brother, Jerome Lakes.

Send flowers to the service of Michael L. Lakes